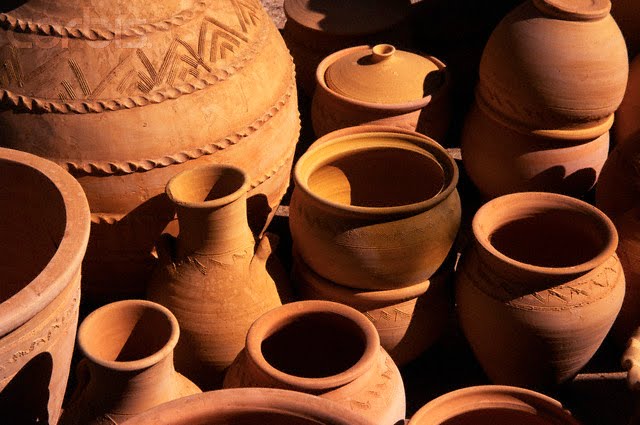 The art of pottery-making is an inherent and distinct testimony to the world’s civilizations as it reflects the extent of their development and advancement. Though pottery-making is one of the simplest forms of art because of its primitive nature, it is in fact, one of the most difficult trades because it involves a form of art. Pottery-making in Oman is considered an ancient industry. The reason it has attracted much interest can be attributed to the multitude of its uses in Omanis’ daily lives. Bahla in Ad Dhahirah Governorate is the most famous town for pottery-making in Oman.

Pottery is of many kinds and shapes, and its uses and manufacturing materials vary. The pots known as jihad are used for keeping water, the red spots with a thick layer known as khuroos are used for keeping water and dates, the small ones are for keeping honey and grease and the pots known as beams are used as cooking utensils. Pottery is also made as coffee pots and thermoses. Clay is the main component of Pottery and is widely available in Bahla in Ad Dhahirah Governorate, where the soil is rich in clay.